A tiny creature with a shock of green hair standing straight up on its head, white fur, no taller than five inches, naked, cackled, darted into the nearest golden chestnut. A pesky troll. Look away! If you play with one of those damn things it’ll follow you! If you actually help one? It’ll bond with you, causing trouble, getting into everything. That’s just the beginning of your troubles with a troll.” A troll is nothing but a nuisance that you can never shake. It would be comparable to having a permanent boil on your skin that always festers just enough to irritate.” Once bonded to you, you can't get rid of them. Once attached to another being he can’t grow or shrink on his own. He needs your emotions to do it. TLC 02/15

What do you feed a troll? TLC 02/3 Can they eat Kibble? Not sure what a kibble is but they’re little tiny garbage dumps. Scavengers. They eat whatever they can find. On Oriceran it’s nuts and berries they find in the forest and the scraps others have thrown away. Works out well for everyone. Here,” he said, gesturing at the vast blacktop full of cars, “there’s not much forest. You’re going to have to find food for him.” LOVES popcorn, Doritos, etc. LOVES FOOD ! ! Will eat anything, anywhere! 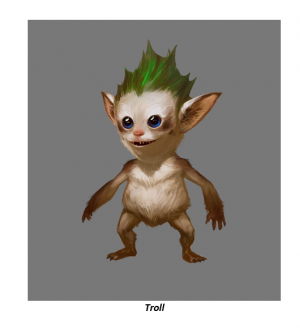 TUMB, 01/2 Trolls got in trouble too, and it was mostly the assholes who bonded with them who were responsible for them turning dangerous. A nice, even-tempered person bonded to a troll might end up with nothing more than an annoying pet. On the other hand, a psychopathic criminal gang-banger might end up with a walking killer yeti to throw at his enemies, if a troll were willing to bond with such a person. Trolls were damned smart; much smarter than they got credit for. Only in very rare cases would they connect with shitty people. But when they did…that was where the “bad troll” stories came from.